Have you every used FaceTime, Skype Chat, or another form of video chat, and you didn't like the way your face looked? As it turns out, you are not alone. Not by a long shot.

New statistics from the American Society of Plastic Surgeons shows that chin augmentation and other facial rejuvenation treatments have shown a monumental spike in popularity in the last year, and it is largely due to how people think they look while using video chat technology. Video chat technology often shows the user’s face on screen, as well as the other member of the chat. Since most people hold their smart phones and situate their computers at a low angle, this can create an unflattering worms-eye view of their face, which highlights any sagging or lack of definition in their chin and jawline.

The new statistics released show that chin augmentation went up in 2011 by 71 per cent versus the previous year, which was a larger growth than Botox, liposuction, and breast augmentation combined. You can view the numbers below:

Chin Augmentation By The Numbers: 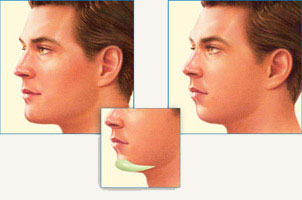